De Gaulle once told Churchill’s wife Clementine, “France has no friends, only interests”. This could have been the motto for his great creation, the Fifth Republic or – for that matter – the Fourth, Third, Second or First. Nicolas Sarkozy is at it again.

Spurred on by the threat of his presidency being guillotined at the French elections later this year, Sarkozy has been in the driving seat, with  Angela Merkel riding shotgun , in pushing for the imposition of a Financial Transactions Tax, popularly known as the Tobin Tax, across  the European Union. So obsessed has he become with the idea that he even suggested earlier this month that France would consider going it alone to get the ball rolling which was remarkably un-French  given that it would spell untold suffering for the French financial sector. Not likely.

The realistic proposal for an FTT that would, in Sarkozy’s (and Merkel’s) view,  ideally include all 27 EU members is far more French – let the surgeon inflict a little pain on the French (and German) patient  while performing major surgery without anesthetic on the British one. Let me explain.

Tobin or not Tobin, that is the question

The Tobin Tax, a miniscule tax on the value of spot foreign exchange transactions, was first mooted in the 1970’s by Nobel Laureate James Tobin  as a means of calming the volatility of exchange rate movements arising from massive numbers of speculative transactions.  The idea did not immediately find traction but, with the global financial crisis of 2008 and the widespread demand for the public disemboweling of bankers and punitive reparations from the banking system, it received a major boost – this time with the express purpose of raising revenue.

With London at the epicenter of the financial world, the British government had to tread carefully and, along with a string of new major regulations, expressed support for the FTT if it was applied on a truly worldwide basis. Egged on by the French (and Germans) the European Commission issued a Council Directive Proposal in September 2011 for an EU-wide tax of 0.1% on stock and bond deals and 0.01% on derivative contracts between financial firms irrespective of what the rest of the world decided to do. Conspicuously absent were spot foreign exchange transactions (the original raison d’etre for the tax) as they ran foul of the EU principle of the Free Movement of Capital.

Doomsday predictions were that there would be an exodus of banks and, because of London’s dominance, upwards of 70% of the tax cost would fall on the UK.  Faced with loss of business and a  tax which would directly fund the EU – and at least partly earmarked for bailing out the Eurozone countries that do not include the UK – Mr Cameron’s government’s flat refusal last December to buy in was understandable.

But beyond the headline catching spats between the leaders reservations about the FTT run deep. A report by the Institute of Economic Affairs, a prominent free-market think tank in the UK, cites an  EU Commission survey that concluded that a 0.1% tax would lead in the long run to a 1.76% fall in GDP (subsequently revised downwards)  – at the most crude level, the additional tax will result in less tax. In considering who bears the burden of this fall the report particularly criticizes the “cascading’ nature of the tax – that because it is imposed at the corporate level, and corporations not being human beings, cannot ultimately bear the cost, the true cost is borne by workers, shareholders and customers in a combination of lower wages, lower returns and higher prices. Adding to that the mobility of the business out of London the result is a global fall in GDP accompanied by a redistribution of jobs and income to non-European centers  (sprinkling a little of the London fall-out in  Frankfurt and Paris along the way) while placing funds directly in the hands of the European Commission to be doled out to recalcitrant Eurozone countries, thus saving the French (and Germans) a lot of dosh at the expense of the British.  Not on David’s watch, mes amis. 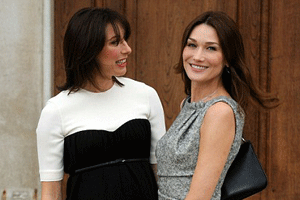 Nick and Dave - Why not let the wives sort it out?