Should auld acquaintance be forgot?

Alex Salmond, the bank manager-faced First Minister of Scotland, has been making  headlines lately due to a referendum planned for 2014 to decide on Scottish independence. What a pity.

On a visit to Westminster Abbey a few years ago, I collared a verger and we went on a hunt for the grave of Andrew Bonar Law, the United Kingdom’s shortest serving prime minister of the twentieth century. The verger didn’t think it was there. I did.  After patiently weaving  around the columns of the Nave – where  Pippa Middleton would later catch the attention of the world –  I was proven right.

Worse than me? Impossible!

Bonar Law was the Canadian-born son of an Ulsterman and a Scot. He grew up in Scotland, considered himself a Scot and, when he became prime minister of the United Kingdom in 1922 he was the THIRD Scottish prime minister in just twenty years. And it didn’t stop there. Less than a year after his retirement No. 4 walked into No. 10; if Bonar Law had the sad distinction of being the shortest serving prime minister of the last century, James Ramsay MacDonald had the sadder distinction of being the worst. Not to labour a point, the tradition has carried on ever since (the last two prime ministers – Gordon Brown and Tony Blair – were born in Scotland).

So, if Scotland is so totally entwined in the tapestry of British life,  what is Alex “no you can’t have a mortgage, Mrs Finlay” Salmond piping on about?

The answer, of course, is pounds, shillings and pence, which is what bank manager-faced people understand – or think they do.

The Flying Scotsman (or should that be the Flying Salmond) appears to balance  his economic reasoning for independence on two planks: Scotland will get the revenue from North Sea oil and gas  that the Sassenachs south of the border are currently pocketing and Scotland will be able to lower its corporate tax rate to  the Irish rate of 12.5%.

It looks like Salmond is fishing in the wrong sea.

North Sea  supplies are starting to flicker. Some of the wells have been totally depleted and other sources  are becoming harder to get at. According to some estimates, the net revenue from the North Sea  is likely to be similar to the current subsidies being paid from Westminster – and that will eventually disappear. 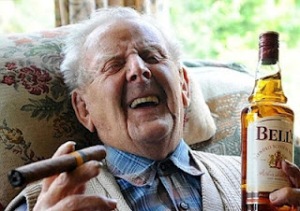 As regards clubbing the tax rate Robert the Bruce style –  as a full partner in a highly developed first world nation as opposed to a relatively poor island that had already been independent from Britain for 60 years, how do you convince your citizens to live with significantly lower social benefits ?  And if you think the Laffer Curve (which seeks the best rate of tax to maximise government revenue) is going to help – forget it – it looks like Britain’s corporate tax rate is on the right (that should be ‘left’) side of the optimum rate.

Leaving other considerations aside, the race to the bottom on tax rates presupposes that investors will choose you. The Irish ingeniously identified that they had something rare to offer the Americans – the ability to offshore their operations thereby pushing off draconian tax bills back home while dealing with a workforce of native English speakers. That is presumably Mr Salmond’s rationale for Scotland to join in the celebrations.

You should see me with a microchip

The American authorities  are now busy looking for ways to repatriate foreign operations as well as profits to the United States. The Obama Administration has spoken clearly about this in the lead-up to this year’s election. Assuming that they can get their legislative system to work logically long enough to pass a law that does not look pieced together by a love-sick monkey – Ireland will be sunk. Is this the time for Scotland to be dipping its toe in the same water? Then, even if the American legislation is deadlocked,  there is the small question of language. Frankly, the Americans who are not only monolingual but also have difficulty with anything stronger than a Deep South accent will have no less hard a time understanding the Scots than the Poles (OK, before I get a rock through my window with “a Glasgow Kiss, especially for you” embossed on it , I would like to point out that my mother was  Scottish and, although her voice was silenced forever nearly half a century ago, a refined Lowlands accent still calms me like no other. BUT I AM NOT AN AMERICAN.) Then there is the  matter of negotiating Scotland’s entry to the EU – they hate the Irish tax rate already – it can be safely assumed that the Europeans will extract a guarantee from Scotland before offering membership.

But Scotland need not fret. Apart from tourism, it has something glorious to offer which is not particularly sensitive to tax rate and means they do not need to resort to Irish low ball tactics.

Taste great with a glass of cognac

Just as Germany has a reputation for high quality manufacturing which no amount of Japanese, Chinese, Burmese and Everythingese competition can seriously challenge, and just as Britain has a reputation for services (especially the financial variety) which – the way it looks – Niko Sarkozy is not going to be around to snarl – Scotland has a reputation  in one, very significant, field.  Thanks to its unique position in the Single Malt Whisky market, the word “Scotland” is synonymous with “Quality”. It needs to build on that in other luxury food areas – as long as they get it right the idle rich (and not so rich) around the world  will lap it up.

So, when the future is looking rosy, why go and mess it all up? What will independence give them other than the trials and tribulations of a small country unprotected from shocks by a bigger, more diversified, whole?

The last time a Scottish ruler misbehaved Queen Elizabeth (the original as opposed to the current sequel) had her imprisoned and beheaded at Fotheringhay Castle. But thereby hangs a cautionary tale – just 16 years later Mary Queen of Scots’ son King James VI rode into London as King James I of England and Ireland thereby bringing the 3 kingdoms under a single – Scottish – crown. But then, the British do keep on electing Scottish (and Welsh) prime ministers. Let’s hope Salmond doesn’t manage to swim all the way to Downing Street – he looks far too wet for the English.